The Stockings Are Hung

I finished the last hand-knit present yesterday afternoon, done in just three days of mad knitting.  Quinnipiac is sure to be a hit with its recipient.   This is one of those gifts that I reluctantly release but promise myself to replace soon – and in my favorite color at that! 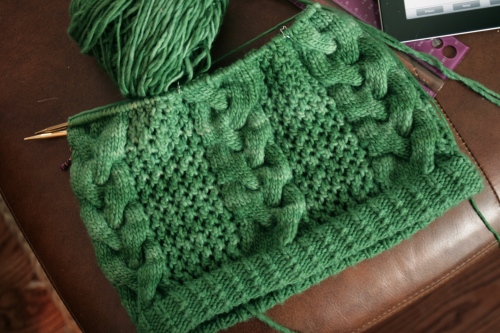 I made a slight modification to the pattern because I was afraid I would run out of yarn.  I only knit 4-1/2 repeats of the main pattern instead of five.  Judging from the teensy bit of leftover yarn I’m glad I did.  And, the height of the cowl is perfect so I don’t think it affected the appearance much.  In fact, I think the full five repeats would have been too tall.

I don’t think I need to tell you that the Malabrigo is softer than soft because just about everyone who knits with it says it is like ‘budder.’  This cowl has serious neck appeal.

Serious love and happiness over this project!

I’m hoping the young woman I knit this for will love it as much as I do.  She is thrilled to get anything hand-knit and being a beautiful young woman this will look far better on her.  It is pure joy to knit for someone like this!

It is a beautiful day here in Colorado with at least twelve inches of snow covering the ground.  A white Christmas!  The sky is clear so I don’t think Santa will have any problems finding my house.  I think he is bringing me some Signature double point needles and maybe a couple knitting books that I’ve been wanting!

The stockings have been hung with care.

Kenzie, looking rather forlorn, is dressed and waiting for her dashing golden retriever boyfriend to arrive.  She asked me to remove the ridiculous antlers from her head and post the following picture which she thinks is much cuter although I insist is rather blurred.

3 Comments on “The Stockings Are Hung”

I haven’t colored by number in years! I couldn’t stop until it was finished!
No electricity but we have a fire in the fireplace, blankets and Beatles.
And I came to Texas to warm up.
WIPGO Weekend! My goal is to finish the White House on Miss Bingley’s Library.
Friday night in Hawk Run Hollow!
Follow Socks-for-Mum on WordPress.com