Clue One has been finished for  KnitPurlHunter’s Ambiguous Cowl Knitalong and the second clue will be up sometime this morning.

One of the goals Michelle has had for this clue is yardage management so gauge is super important. In fact, if my gauge  is not spot on with the pattern’s gauge I will run out of yarn and not be able to finish the cowl. The participants knitting the large cowl with four skeins of yarn will not be sweating as much as those of us knitting the small size with only two skeins of yarn.  Our yardage is pretty tight. 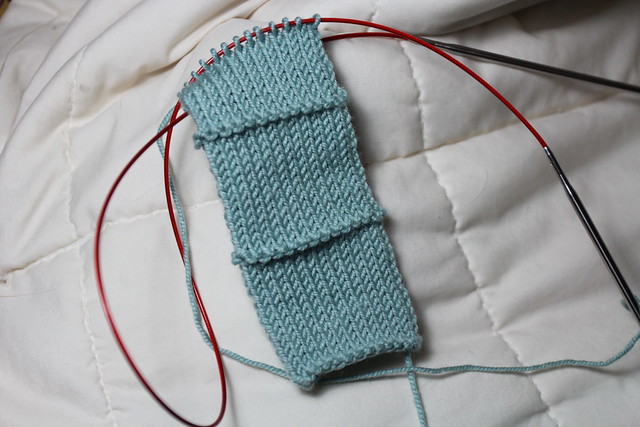 I’m usually the ‘gauge’ police with my friends so I was not the least bit daunted when there was lots of chatter about the importance of gauge swatches, weighing yarn and comparing it to how much Michelle used when she knit the first clue, etc.

BUT THEN … I knit my gauge swatch using the designated size 5 needle, and then size 4 and then size 3 and I could not get gauge on any of the needles and there was not a noticeable discrepancy between the changes in needle sizes. I’m a fan of great BIG gauge swatches, not teeny TINY ones. The bigger the swatch, the more accurate it becomes when you measure it.  I surmise that my tiny swatch is telling big fat white lies to me right now. 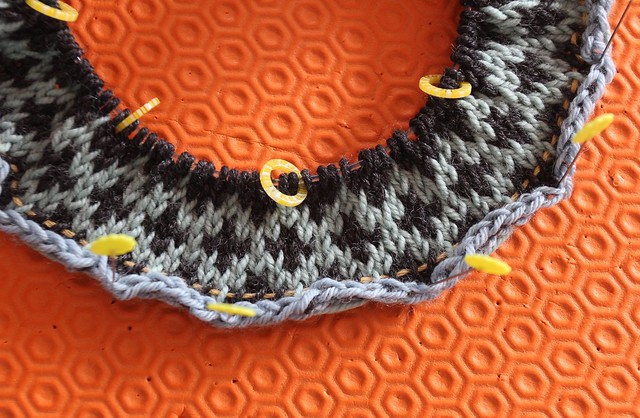 So what did I do?  I blindly plunged forward anyway knowing my tension is usually quite loose and knit with the pattern’s designated size 5 needle and hoped for the best.  But, of course, my gauge was way off when I pinned it out for its first photo shoot. Lesson learned…… why did I do that?

I ripped back and knit the clue all over again dropping down a needle size knowing that I should have gone with my gut instead of that teeny tiny gauge swatch. Those little swatches seem to always be wrong. Being a loose knitter and typically have to go down a needle size or two from what the pattern says. 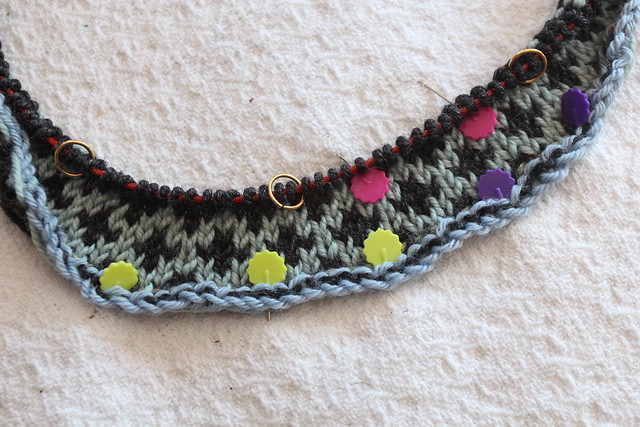 This completed clue, take two,  still does not meet gauge but it slightly better than the first attempt. I think I probably should go down to another needle size but since I didn’t use as much yarn as the designer used  I don’t think that is necessary.  At least, I hope not.

Can’t wait to move on to the next clue – I hear it a 14 stitch repeat!

← Yarn Along as I Do Some Warping
Wandering Moon – Part 1 →