Yarn Along as I Heal From Surgery

Joining Ginny this morning on a YARN ALONG to talk about a book I read over Christmas ….

The Lake House
A Novel
By Kate Morton

From the New York Times and internationally bestselling author of The Secret Keeper and The Distant Hours, (both I have not read yet) an intricately plotted, THE LAKE HOUSE was a spellbinding new novel of heartstopping suspense and uncovered secrets and was the perfect page-turner for me in chilly December whilst knitting Christmas presents.

I initially was drawn to this book simply because of its setting.  Living on her family’s idyllic lakeside estate in Cornwall, England, Alice Edevane is a bright, inquisitive, innocent, and precociously talented sixteen-year-old who loves to write stories. But the mysteries she pens are no match for the one her family is about to endure… Did I mention how much I love Cornwall?

One midsummer’s eve, after a beautiful party drawing hundreds of guests to the estate has ended, the Edevanes discover that their youngest child, eleven-month-old Theo, has vanished without a trace. What follows is a tragedy that tears the family apart in ways they never imagined.  I usually do not like novels that involve the tragedies of children but this one kept sucking me in.

Decades later, Alice is living in London, having enjoyed a long successful career as a mystery author. Her little borther’s case has never been solved, although Alice still has a suspect. Miles away, Sadie Sparrow, a young detective in the London police force, is staying at her grandfather’s house in Cornwall haunted by her own nemesis. While out walking one day, she stumbles upon the old estate—now crumbling and covered with vines, clearly abandoned long ago. Her curiosity is sparked, setting off a series of events that will bring her together with Alice and reveal shocking truths about a past long gone…yet more present than ever.

This is a lush, atmospheric tale of intertwined destinies and Kate Morton is a master weaving lives together. This novel from is an enthralling, thoroughly satisfying read and now I must read The Secret Keeper and The Distant Hours! 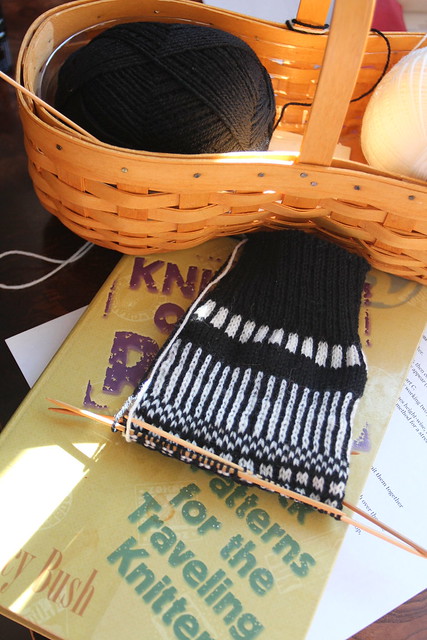 One week ago I was on day 15 of excruciating pain waiting to see a surgeon the next day.  A day later my gallbladder was removed and I am, relatively speaking, much better.  I will take respite to allow for recovery and both books and fiber will be my constant companion. Now I’m off to check out other books I can add to my ever growing list from participating in Ginny’s Yarn Along.

7 Comments on “Yarn Along as I Heal From Surgery”

I’m excited to start my Spring Focus Board tomorrow.
No electricity but we have a fire in the fireplace, blankets and Beatles.
And I came to Texas to warm up.
WIPGO Weekend! My goal is to finish the White House on Miss Bingley’s Library.
Friday night in Hawk Run Hollow!
Follow Socks-for-Mum on WordPress.com