Yarn Along on a Productive Day

Piping up and tagging along with Ginny this afternoon on a YARN ALONG….and reading what her peeps have to say about books and knitting. 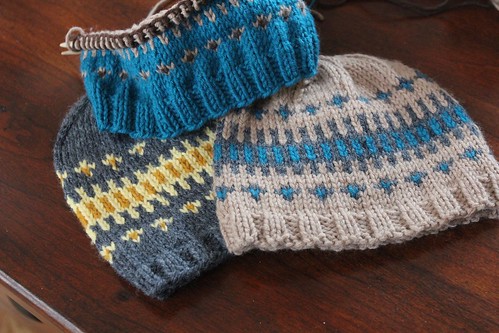 It has been a productive day for me as I juggle household chores, working on a third Clayoquot Togue hat for the new grand baby and finishing up My Grandmother Asked Me to Tell You She’s Sorry, by Frederik Backman.

With the opening chapters of this book, I wondered whether it would be one I could stick with to the end.  The language was a little too ‘colorful’ for me, the child a bit too precocious and the make-believe world of Marabous a stretch out of reality and seemingly pointless.   And then there was a sudden death……

“People in the real world always say, when something terrible happens, that the sadness and loss and aching pain of the heart will “lessen as time passes,” but it isn’t true. Sorrow and loss are constant, but if we all had to go through our whole lives carrying them the whole time, we wouldn’t be able to stand it. The sadness would paralyze us. So in the end we just pack it into bags and find somewhere to leave it.”

The story appears to be an intricately woven fairy tale designed to help a precocious granddaughter cope with being ‘different’.  But about half-way through the book you realize the people living in this granddaughter’s house are actually the characters in the make-believe world of Marabous.  It was a fabulously written story of a grandmother’s influence on her grandchild and upon others.  The grandmother is not what she appears to be…… but…… I share no more so that you can discover for yourself.

“Because not all monsters were monsters in the beginning. Some are monsters born of sorrow.”

“Having a grandmother is like having an army. This is a grandchild’s ultimate privilege: knowing that someone is on your side, always, whatever the details. Even when you are wrong. Especially then, in fact. A grandmother is both a sword and a shield.”

“Because if a sufficient number of people are different, no one has to be normal.”

Have you read a good book lately?  If you are curious about what others are reading and knitting then join us on a Yarn Along!

2 Comments on “Yarn Along on a Productive Day”