Where Did All the Pokeberries Go?

Posted on September 5, 2016 by socksformum

Where did they go? They were here last week, the pokeberries that is.  But now, when I want to pick them, they are gone.

Our move down to the Texas property was without incident.  Of course, the usual moving frustrations happened – like ending up down here with a big box of hand-knit wool socks which will never be worn in this climate.  Several important items that were put aside to go on the truck ended up not fitting on the truck at all.  Like a sewing machine.  Like some really comfy chairs for my new fiber cave and now I’m sitting on deck chairs.  Like a pressure cooker for canning  although all the canning jars made it here.  Like a rototiller for tilling a garden – do you mean I have to use a shovel to dig one?  Well, that is what happens when you attempt to divide your house in half and live in two places.  Some stuff just gets left behind. 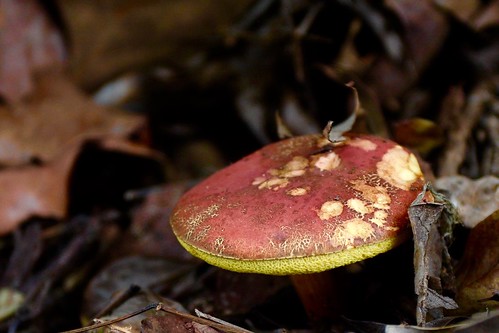 Things are different here.  Not bad.  Just different.  Mushrooms grow here as they do in Colorado but their colors are more vibrant.  This one was found hiding under some leaves I raked away. 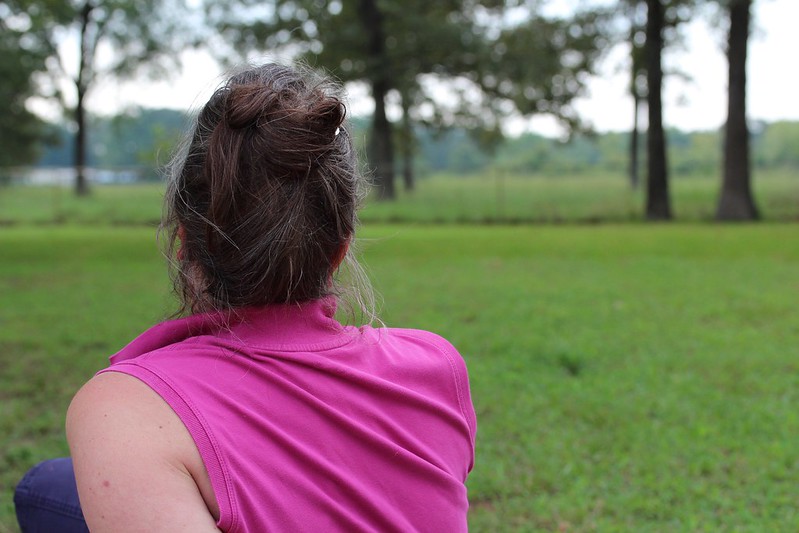 Things are green here.  Lots of green to mow.  I take care of everything within the fenced yard and hubby takes care of everything else, all 64 acres ….. except the original road into the property and that is my job because I need a place to walk.  The first time I cut the lawn it took two and a half hours in second gear.  Today it would have been quicker because I moved up to third gear but on my fourth turn around the yard hubby came out and informed me that I forgot to engage the blade.  I’ll learn. 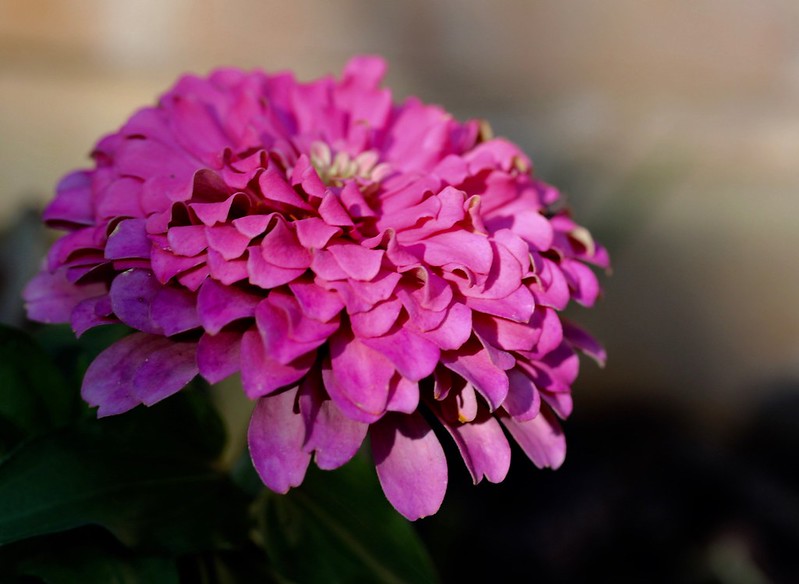 Things grow here, like zinnias.  I threw out some zinnia seeds and three days later they are growing!  That does not happen where I live in Colorado. 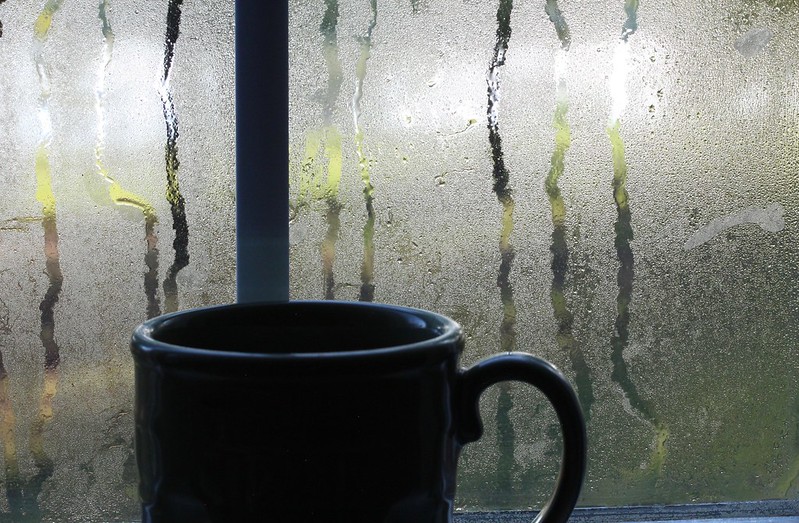 Another thing I am not used to is dew on the ground and on the windows.  Early morning dew every morning. 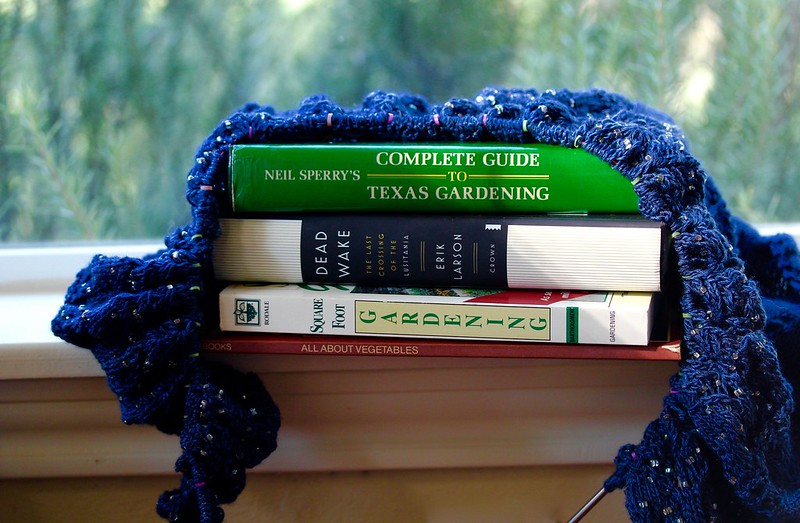 I’ve been researching all the plants on the property and identifying them by consulting with my friend named Google who is one brilliant lady.  My dad had a few books to lend me, too.  My nose is in this book most days and I’m throwing in a few thousand beads for fun.  I am so ready to finish this shawl!

I showed my mother a berry bush with a fuchsia vine and dark purple berries on it.  She told me that she painted her face with those berries when she was but a girl.  She also told me not to eat them because she thought they were poisonous.  They might be elderberry.  They might be Pokeberry.  They resemble each other a lot but elderberry only has a fuchsia stem where the berries are and Pokeberry has a fuchsia stem throughout throughout the plant so it turns out that my berry bush is a Pokeberry. 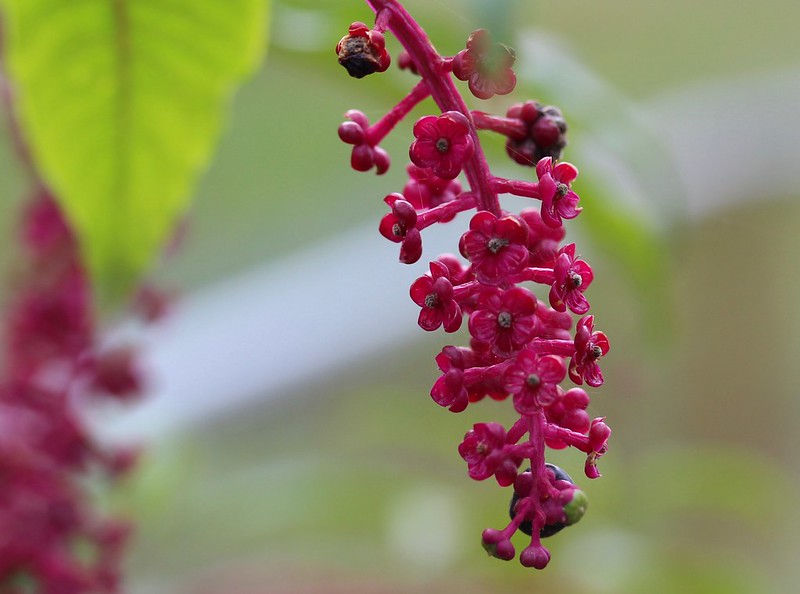 I went to bed wondering if I could dye wool with the berries.  Shortly thereafter I decided to get up and do some research and was thrilled to find out that people have been dyeing with pokeberry for hundreds of years.  It produces shades everywhere from garnet to pale pink depending on how long the wool soaks in the pokeberry juice.  I turned the light off purposing to wake up early and pick a gallon bag full of pokeberries.

The next morning most of the ripe berries were gone.  Where did the pokeberries go?  Some critter? I’ll beat them to it next time round.  Pokeberries are supposed to produce fruit through Halloween so there is still time.

← The Pigseyes Adventure Checked Off
A Dead Wake in Texas →

I haven’t colored by number in years! I couldn’t stop until it was finished!
No electricity but we have a fire in the fireplace, blankets and Beatles.
And I came to Texas to warm up.
WIPGO Weekend! My goal is to finish the White House on Miss Bingley’s Library.
Friday night in Hawk Run Hollow!
Follow Socks-for-Mum on WordPress.com